Note:Your will receive the item color like the picture show .
The fairing set has many kind of design .
We can’t guarantee the color match your motorcycle original color . 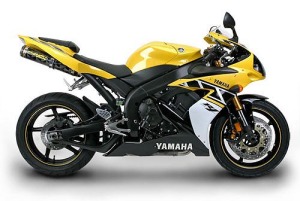 With the competition advancing, Yamaha made some major changes to the model. This included style updates, like an under seat twin exhaust, and performance upgrades including radial brakes, and, for the first time an R1 Ram-air intake. Furthermore, the tendency forwheelies by earlier productions was reduced by changing the geometry of the frame and weight distribution. The all-new engine was no longer used as a stressed member of the chassis, and featured a separate top crankcase and cylinder block.

The 2004 R1 weighs 172 kilograms (380 lb) dry. The conventional front brake calipers were replaced by radially-mounted calipers, activated by a radial master cylinder. A factory-installed steering damper was also added this year. Combined with the changes to the frame, this helped to eliminate the tendency of the handlebars to shake violently during rapid acceleration or deceleration on less-than-perfect surfaces (aka “tank slapping”).

Motorcycle Consumer News tests of the 2004 model year YZF-R1 yielded a 0 to 60 mph (0 to 97 km/h) time of 3.04 seconds and 0 to 100 mph (0 to 160 km/h) of 5.42 seconds, a ¼ mile time of 9.90 seconds at 144.98 mph (233.31 km/h).
For 2006, the swingarm was extended by 20 millimetres (0.79 in) to reduce acceleration instability. In this year, Yamaha also released a limited edition version in original Yamaha racing colors to celebrates its 50th anniversary. The model (LE/SP) featured a Kenny Roberts front and rear custom Öhlins suspension units developed by the same team as the YZR-M1 MotoGP bike. Custom forged aluminum Marchesini wheels specifically designed for the LE shaved nearly a pound off the unsprung weight. A back torque-limiting slipper clutch, and an integrated lap timer rounded out the package, making the LE virtually a production racer. Only 500 units were made for the United States with another 500 units for Europe.  Source: wikipedia
All orders ship FREE from http://www.MadHornets.com

All Fairing Stay Brackets are FREE Shipping from http://www.MadHornets.com

We offer FREE shipping on all orders to anywhere in the world.  www.MadHornets.com