With the competition advancing, Yamaha made some major changes to the model. This included style updates, like an under seat twin exhaust, and performance upgrades including radial brakes, and, for the first time an R1 Ram-air intake. Furthermore, the tendency forwheelies by earlier productions was reduced by changing the geometry of the frame and weight distribution. The all-new engine was no longer used as a stressed member of the chassis, and featured a separate top crankcase and cylinder block.

The 2004 R1 weighs 172 kilograms (380 lb) dry. The conventional front brake calipers were replaced by radially-mounted calipers, activated by a radial master cylinder. A factory-installed steering damper was also added this year. Combined with the changes to the frame, this helped to eliminate the tendency of the handlebars to shake violently during rapid acceleration or deceleration on less-than-perfect surfaces (aka “tank slapping”).

Motorcycle Consumer News tests of the 2004 model year YZF-R1 yielded a 0 to 60 mph (0 to 97 km/h) time of 3.04 seconds and 0 to 100 mph (0 to 160 km/h) of 5.42 seconds, a ¼ mile time of 9.90 seconds at 144.98 mph (233.31 km/h).
For 2006, the swingarm was extended by 20 millimetres (0.79 in) to reduce acceleration instability. In this year, Yamaha also released a limited edition version in original Yamaha racing colors to celebrates its 50th anniversary. The model (LE/SP) featured a Kenny Roberts front and rear custom Öhlins suspension units developed by the same team as the YZR-M1 MotoGP bike. Custom forged aluminum Marchesini wheels specifically designed for the LE shaved nearly a pound off the unsprung weight. A back torque-limiting slipper clutch, and an integrated lap timer rounded out the package, making the LE virtually a production racer. Only 500 units were made for the United States with another 500 units for Europe.  Source: wikipedia
All orders ship FREE from http://www.MadHornets.com 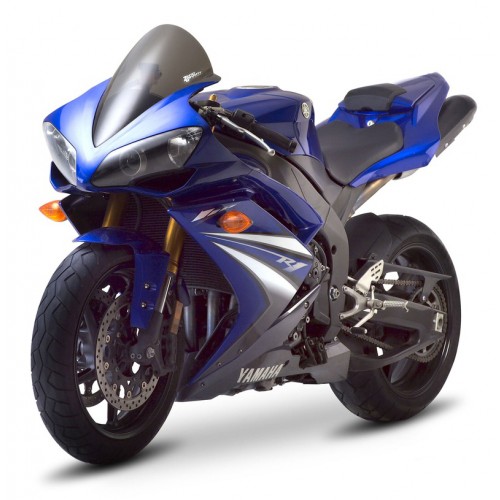 In late 2008, Yamaha announced they would release an all new R1 for 2009. The new R1 takes engine technology from the M1 MotoGP bike with its cross plane crankshaft, the first ever production motorcycle to do so. Crossplane technology puts each connecting rod 90° from the next, with an uneven firing interval of 270°- 180°- 90°- 180°. The idea of this technology is to reduce variations of internal crankshaft speed, thus giving the new R1 a more linear power delivery. Yamaha claims the bike would give the rider ‘two engines in one’, the low end torque of a twin and the pace of an inline four. As with previous incarnations of the R1, the 2009 model keeps its YCC-T (Yamaha Chip Controlled Throttle).

Another advancement included on the 2009 model was D-Mode Throttle Control Valve Mapping, which allows a rider to choose between three distinct maps depending on the rider’s environment. Each mode of operation controls YCC-T characteristics, changing how the R1 reacts to driver input. The first mode is Standard Mode, which delivers performance for a wide variety of driving conditions. The second mode is “A” mode which will give a rider more available power in the lower to mid RPM range. The third mode is “B” mode, which is a dial back of the previous mode, designed to soften throttle response in inclement weather and heavy traffic. D-Mode throttle control is controlled by the rider through a forward mode button near the throttle. The instrument panel is more comprehensive than previous models, and the 2009/2010 Yamaha YZF-R1 model now features a gear indicator as standard.

Overall handling of the R1 was improved through several changes to frame and suspension. A new sub frame was designed for the 2009 R1, consisting of magnesium cast in a carbon fiber mold. This new subframe offers a superior strength-to-weight ratio, while helping keep mass closer to the center of gravity, and subsequently gives the bike greater handling performance. The rear shock absorber on the 2009 offers variable speed damping, as well as an easy to tweak pre-load via a screw adjustment. The rear shock now connects underneath the swing arm through a different linkage; a change from previous years’ models. Front suspension takes its cues from the M1 as the left fork handles compression damping while the right controls the rebound duties. To improve overall handling and safety, this is the first year Yamaha developers included an electronic steering damper on a production R1.

The overall look of the R1 has changed drastically. In a side by side comparison between the 2007 and 2009 models, the 2009 looks much more compact and could be compared to the size of the R6r. The center-up exhaust on the 2009 is significantly larger compared to previous models, due to changes in emissions controls. The front has the same classic R1 shape, though the air intake location and headlamp design have been revamped on the 2009 model; utilizing only projector lamps, and using the new-found design space within the nose cone to reroute ram air tubes next to the lights.